We would like to introduce you to our Regional Independent Member, Mr. John Condie. 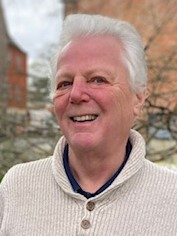 John has given us a short insight into how he joined the Regional Council and what he has achieved in the last three years.

“Three summers ago it was the enticing sizzle of a sausage and a free glass of wine which led me to be amongst the committee of the South West Region of CAMC as they hosted an on-site ‘Meet the Members’ event. These occasions are intended to raise the profile of the Club’s working structure and to enable members to express concerns, suggestions, compliments. It was a delightfully informal couple of hours spend sharing experiences with people who enjoy the same holiday lifestyle. It was a live performance of the Letters Page in the magazine, plus wine.

As we were about to leave, one of the Committee asked me if I would consider getting involved and described the role of an Independent Member. Now, I have never been one for joining and have coasted to my mid-sixties having only been a milk monitor aged 8 and a fixtures secretary for my school’s rugby teams. Then three emotions gradually took over. First, flattery, it was a nice feeling to be asked, then, curiosity, I had just been enjoying a social gathering with nice people who are part of the team that enable me to enjoy my holiday choice and I would quite like to learn more. And, finally, having enjoyed camping and caravanning pretty much all my life, in a selfish way could this add a dimension, an extra pleasure to the whole experience. Without any of the wine influencing my decision within a couple of months I had attended the Region's AGM and been accepted onto the Regional Council as an Independent Member.

There is nothing arduous about this participation - 4 quarterly meetings, and an AGM. It has been a gentle learning curve and after each meeting I’ve come away knowing more about the club, having met kind and enthusiastic people and increased the pleasure I get from my caravan. I have taken part in a ‘Meet the Members’ event - still with hot dog and wine - and been to Head Office for the annual Regions and Divisions Forum. I have no regrets in getting involved and hope to make useful contributions in the coming years. Already I sense a slight shift in my thinking: it’s now not so much the Club, it’s becoming more my Club.”

We would like to thank John for taking the time to ‘put pen to paper’ and if you have a question, would like to make a suggestion or a comment on any of the services which the Club offer, other than Insurance as that is a specialist subject, please do not hesitate to contact John: and now he has told you a little about himself I am sure you will be reassured that he will do all he can to help you.

Should you see John on a Club Site or CL, then please stop and ‘say hello’!